Recently, the three of us (Me, Rebecca & Eli) went to a mall in Millpitas CA to have lunch and mess around at one of those kids places with blow up stuff everywhere. 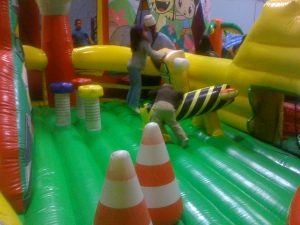 We made a lap around mall and I got a back rub for 12 bucks. Only catch was it took place in the middle of the mall out in the open and it was more crowded than TGI Fridays on a Friday. Totally worth it….besides Eli taught me recently that all I have to do is close my eyes and nobody can see me.

At around 11:51 I started getting really hungry and that is usually followed grumpiness if not squared away in fairly short order. We casually clawed our way through the weekend crowd and posted up at a table that looked to have only been eaten at thirty or forty times since it’s last wipe down…we’re lucky like that. If you’ve ever been to a food court on the weekend with a 2 year old, you can appriciate what a truly stategic mission it is. If you haven’t, liken it to Contra (Nintendo) but you promised yourself not to employ the up up down down code so really need to think your moves through carefully. (shout out to the 90’s)

We huddled and then looked out at the landscape to take in the possibilities. This is one of my favorite moments. It makes me feel how Bill Cody must have felt just before he muttered “giddy-up!” and then raced down a hillside into the valley to take his pick of a vast herd of buffalo.

The options send me reeling, then before I can organize my thoughts, Rebecca says: “Wow John, this is right up your alley, I think just about the whole world is represented in this food court.” She was wonderfully correct! My words failed me as I reached into my pocket and wandered off to read menus and take pictures.

I have to admit, a bit of anxiety started setting in as the reality of having to choose just one started hitting me. I decided to let it breath for a moment and procure a hot dog for Eli so I could have a moment to think.

Looking back on situations like this remind me of what a remarkable woman I’m married to. I’m weird about stuff and it’s less than endearing when I’m overtaken by a food court or some other silly thing but Rebecca understands that at the end of the day, I’m a pretty simple guy and I get excited about pretty simple stuff and she doesn’t huff and puff and roll her eyes about it, she let’s me charge the valley and choose my beast carefully. Thanks babe!

Peruvian cuisine stems mainly from the combination of local cuisines and ingredients with the cuisines of Spain, China, Italy, West Africa and Japan, due to the arrival of immigrants from those locations. Due to a lack of ingredients from their home regions in Peru, these immigrants modified their traditional cuisine using items native to Peru and those which had been introduced by the Spanish during the colonial period. The three traditional staples of Peruvian cuisine are corn, potatoes and beans. These ingredients have been combined with a number of staples brought by the Spanish, such as rice, wheat and meat (such as beef, pork and chicken). Many traditional foods, such as quinoa, kiwicha, chili peppers and several roots and tubers, which had been tossed aside for European products since Colonial times, have seen a resurgence in popularity in recent decades with a revival of interest in native Peruvian food crops and culinary techniques.

Rebecca loves me and encourages to be me, but I was closing in on ten minutes trying to decide so I put my game face on and did what any reasonable person in my situation would have done…I went around and started sampling the food! Food court establishments are famous for believing that if try their particular version of really sweet chicken, you will be immediately hyptotised and order a heaping pile of it. Unfortunatley for them, I’ve been building my tolerance for these little morsels for many years so I put a hurt on nearly all of them.

Are you starting to feel the pressure…

I am, and all I’m doing is remembering it…

I took a long pause at the Vietnamese offering. I’ve been eating Phoa (delicious noodle soup) at least twice a week for the last ten weeks or so and the smell just calls to me. I regrouped and got serious though, why would I eat what I always eat at a time like this. I did some mental jumping jacks and on got back to business.

This Chinese place almost got me with the sweet chicken. I saw the servers’ sinister smile as I bit into it, he thought he had me right were he wanted me. I was sobered by his glance. I slowed my bite and rose my head, smiling right back at him as I placed my spent toothpick in the Styrofoam receptacle. Close call but my vision was taking shape…I knew what I wanted.

I turned and headed toward the homeland when this guy walks by with a heaping bowl of noodles topped with what looked to be spare ribs or something. It was the final test. Fortunately I had enjoyed Korean BBQ just a few days earlier so my defense systems were working exceptionally well related to those particular aromas.

Finally a approached the final destination with a clear vision of what to fill my plate and my belly with.

I realized I hadn’t had a Cajun meal that I didn’t prepare myself since I arrived in CA. I ordered the Blackened catfish with Dirty Rice and spicy cabbage. It was very…very good.