I woke up late, like around 8:00 am this morning but so did everyone else in the house so I was still able to sneak out to the mango tree for a little while before things got moving. It was warm even in the shade, and the breeze off the ocean was like a natural fan blowing at just the right speed. I smoked a Nicaraguan puro, 60 x 4.5 like a Nub, but not a Nub, ash held on till the very end. While I was reading, Nunu came along and handed me a little yellow pouch tied in a knot at the top. He told me it was local tobacco, that a lady in the village grows it and sells it. It’s not for smoking, it’s for chewing which is fine with me:)

As the kids begin getting dressed and moving, they all seemed a little hung over from the long day at the beach yesterday, especially Indiana. Every time I turned around he seemed to be spitting mad about something one of his brothers did or said. Now don’t get me wrong, his brothers are more than capable of pissing him off but this was different, Indy was looking for a fight. What he got instead was lots more hugs from Rebecca. We’ve been gone a while and I think he’s feeling it so some grace was in order. Late in the morning I took the boys out to the tree and read Harry Potter to them for good long while, it seemed to settle everyone down. Rebecca was hanging cloths on the line while I read, it was nice.  After that, Rebecca read to me for a good long while from a different book, while the kids played. I can’t remember the name of the book but she’s gonna read me the whole thing. It’s a book about food and moreover, about how food connects us more deeply to each other, and to God. She read the introduction and forward, I can’t wait to get into it with her. 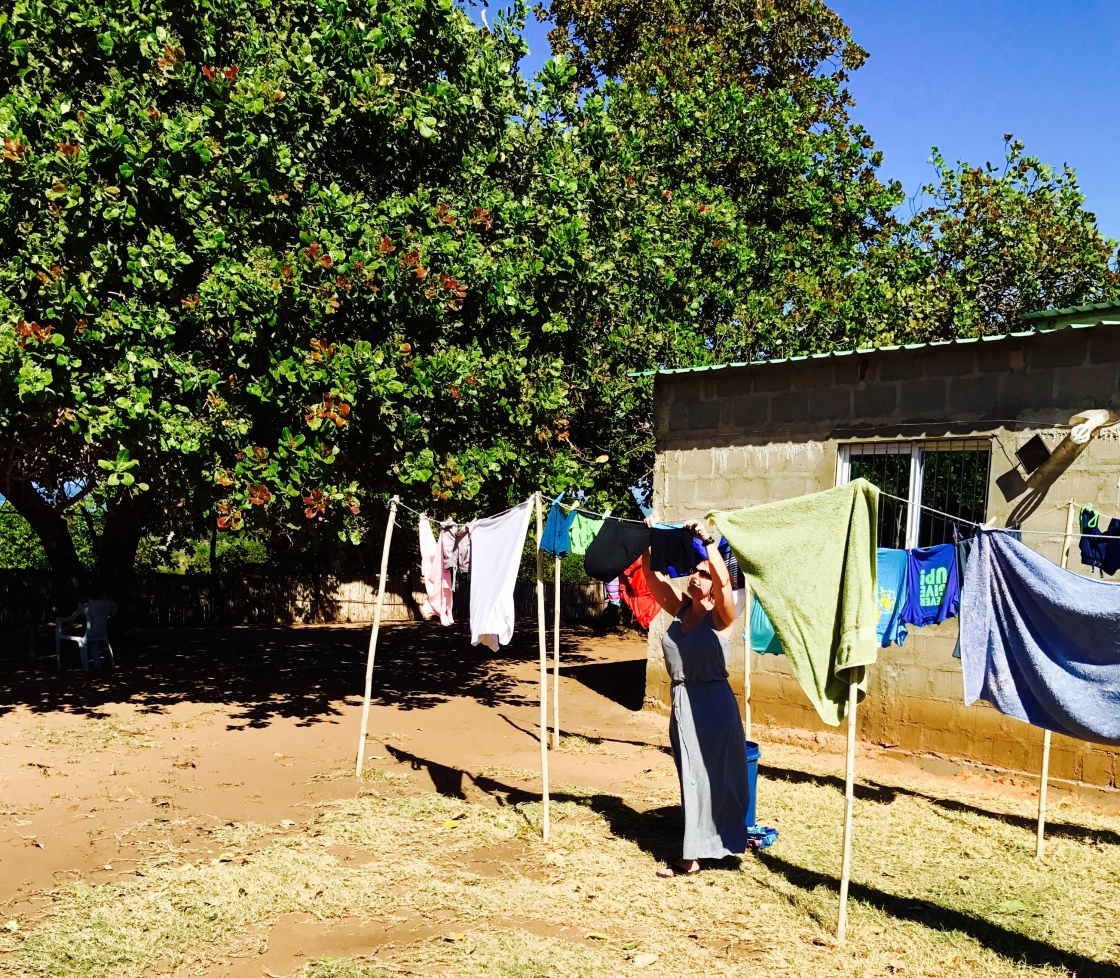 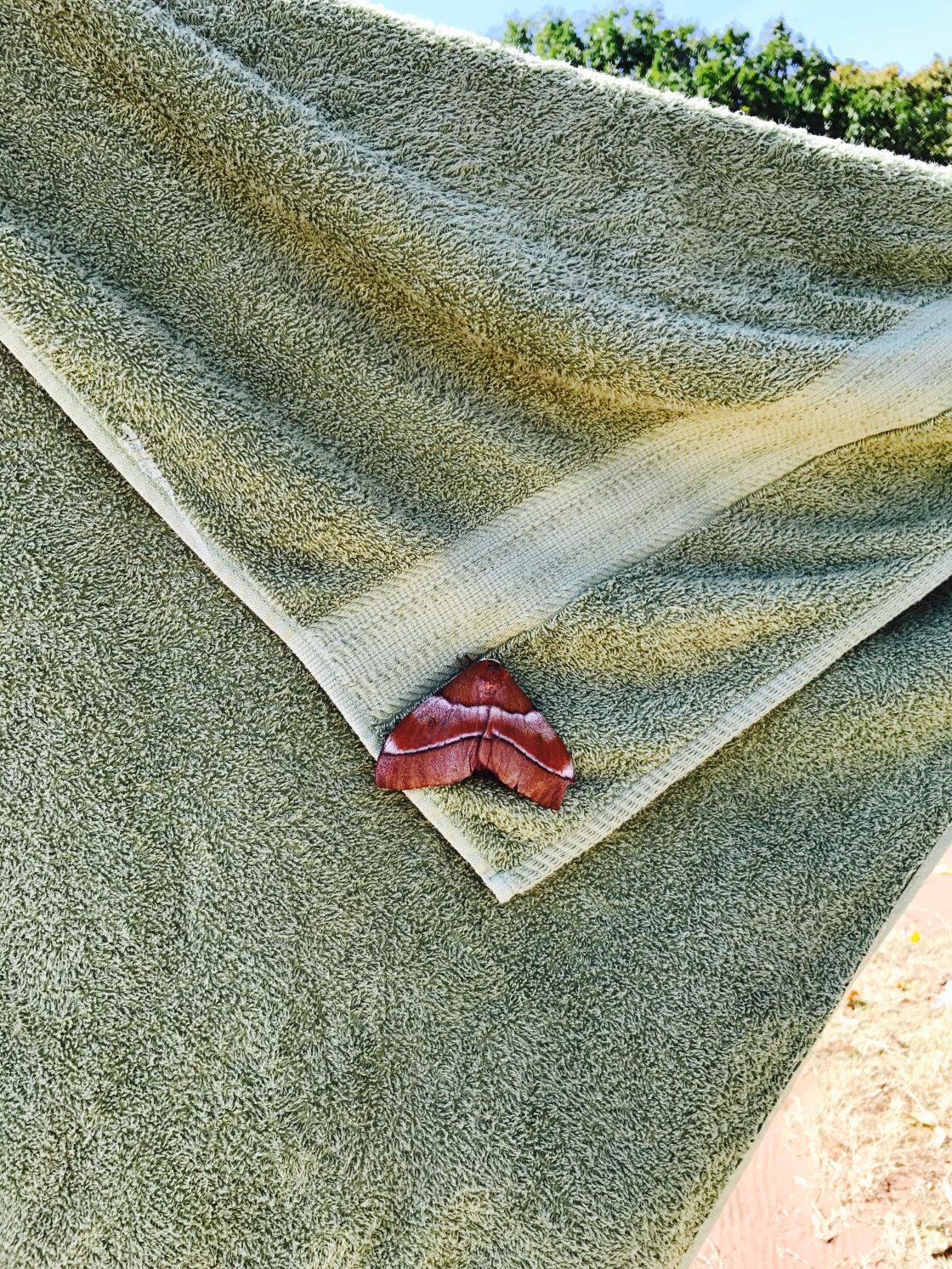 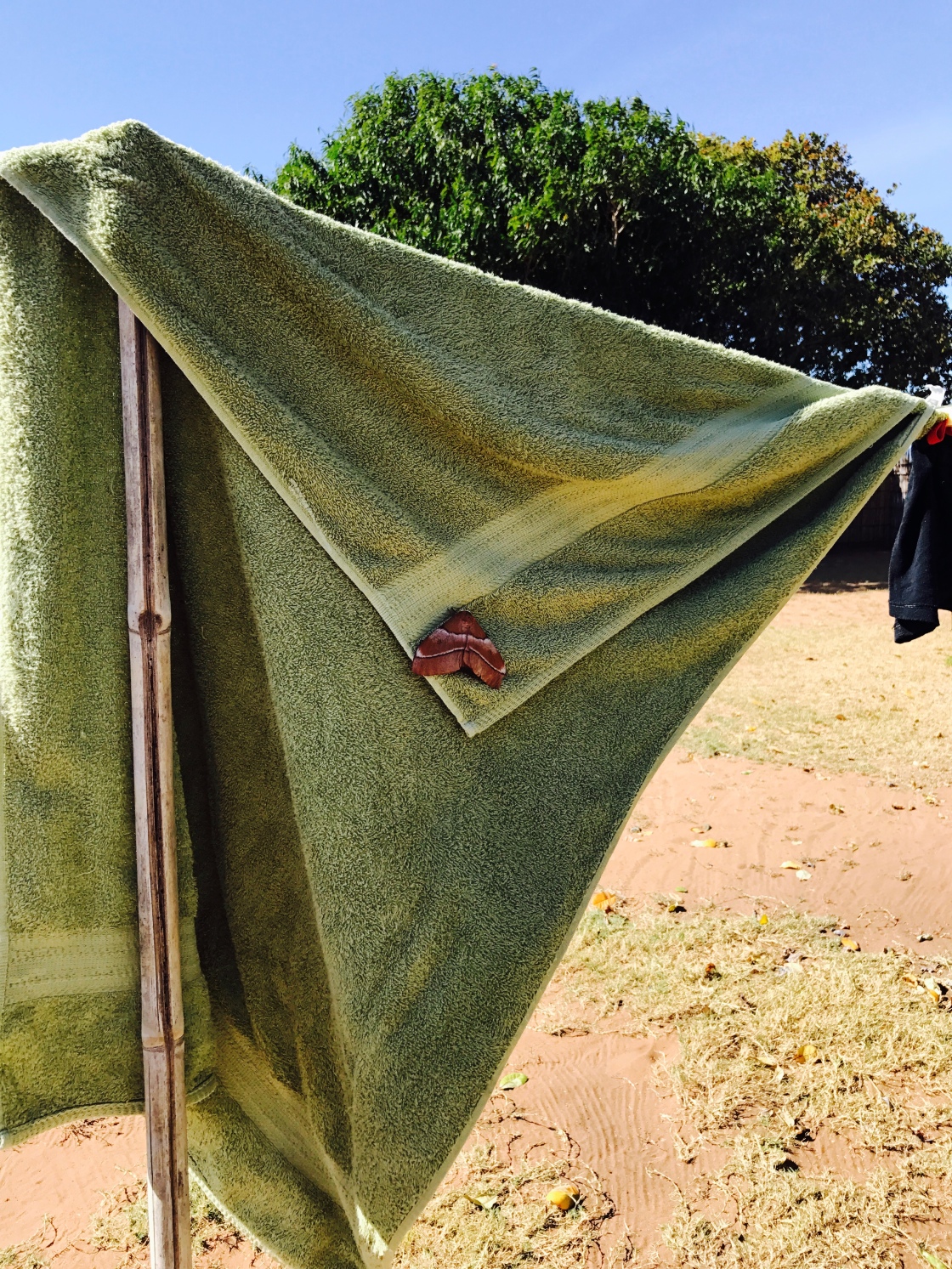 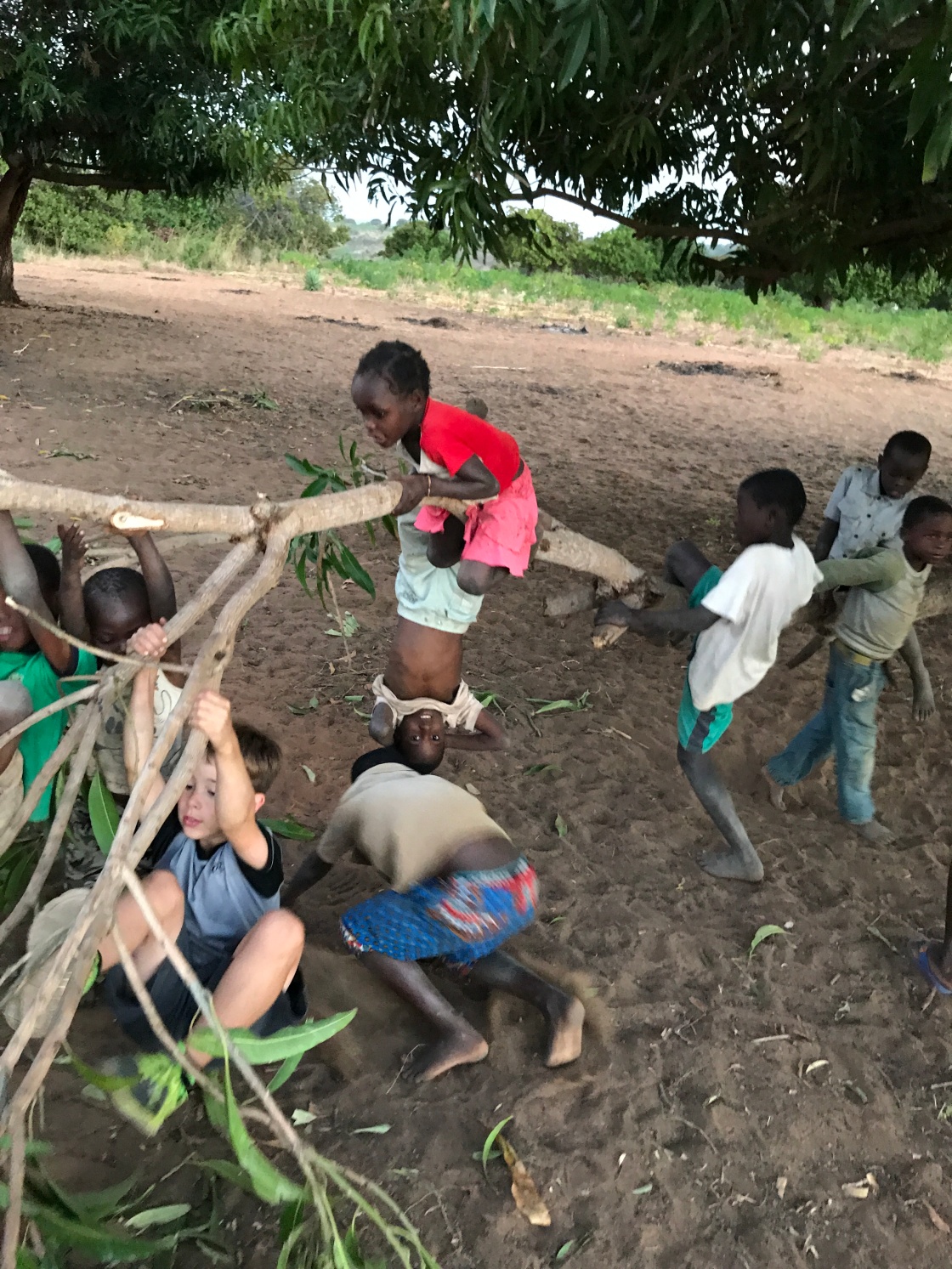 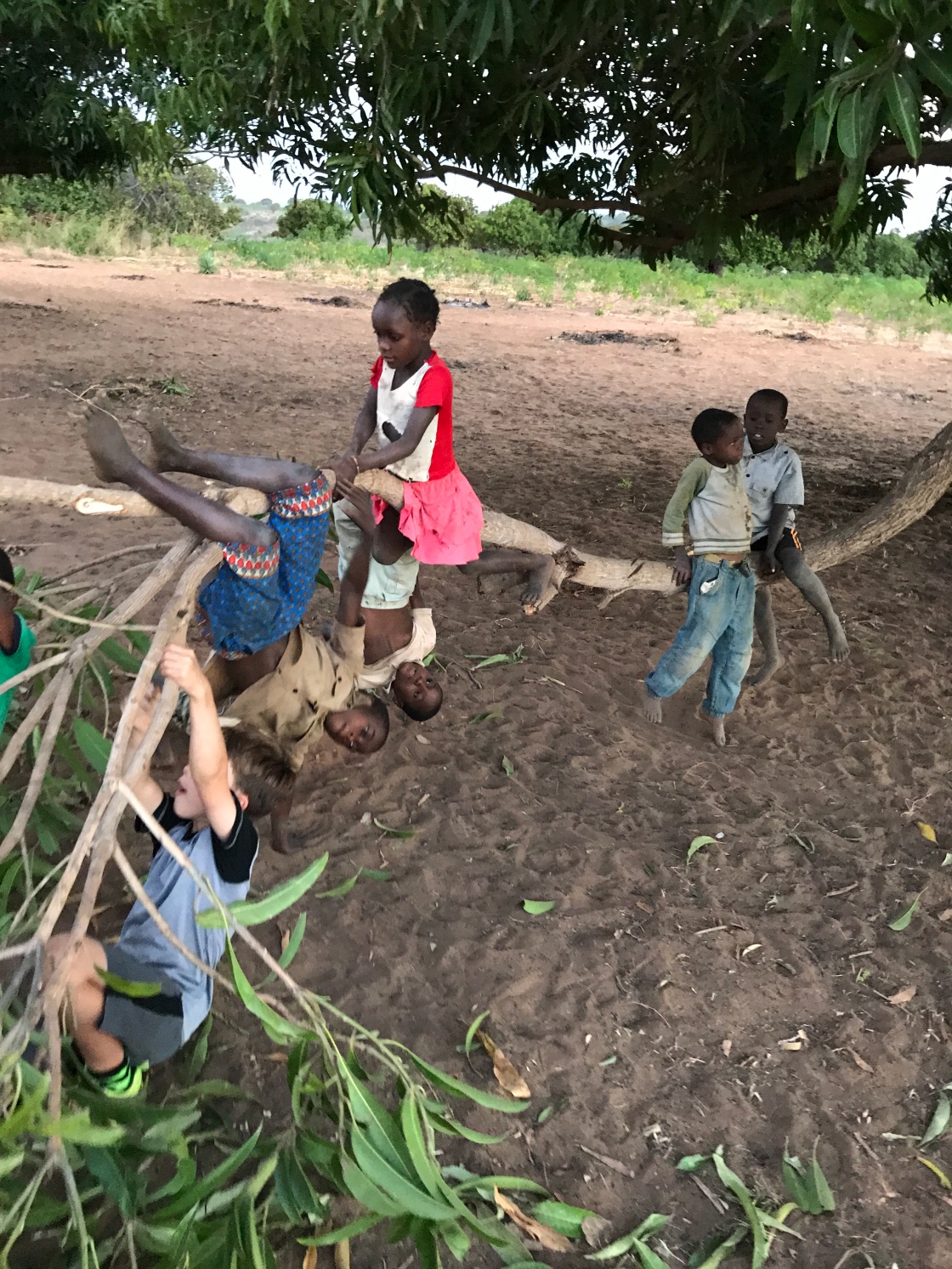 We had beans and rice again for lunch. At home, beans and rice seems like such a side dish but here it takes center stage and more and more I understand why. It’s inexpensive, contains basic nutritious sustenance and is really delicious when made with love and let me tell you…it’s made with love here. As a frame of reference, Decker even gobbles it up…nuff said.

After lunch we all headed out to do lots of running around. We went to the market to buy some authentic fabric and then brought it to a tailor so he could make some clothing for us to take home. So awesome! We also bought some hand made keepsakes like baskets and such and Amanda bought some 4′ x 6′ wicker mats to put out on the ground for kids to sit on for our this evenings festivities. From there we headed into the old downtown area of Pemba to buy big bottles of fresh water and then we waited while Nunu ran in to buy some binder clips to hold the sheet in place for this evenings big event. Our next stop was the vegetable market where 17.00 us bought us about 8 full bags of fresh fruit and veggies. Mostly normal stuff except this fruit they have here called a custard apple. It’s pretty ugly but the soft custardy inside tastes like a smoothy made from banana and pear. Also, we got some local bananas, smaller than ours, and better. Same texture but there is a slight tang to them that is really delicious.

On the way home, our final mission was to find some fresh crabs and Amanda and Nunu were confident that the guy we saw on the side of the road on the way to the veggie market was our man. They were right! Dude had dozens of crabs. We bought 30 live crabs, probably 20 pounds for 50.00 usd.

We bolted back to the house and got the water boiling for the crab along with beans on the stove and mac n cheese…a feast indeed. While dinner was being made, we were also getting ready for the 40 or so kids that would be burting through the gate in just a little while. Amanda had the GREAT idea of using a projector we brought from home to show The Sandlot on the side of the house for all the village kids. I also took the opportunity to show a little bit of the 2005 world series cuz ya know….WHITE SOX BABY! Amanda made a garbage can full of popcorn and Nunu made a 5 gallon bucket full of cola flavored kook-aid…yes you read that right…COLA FLAVORED KOOL-AID. The kids has a wonderful time. Lot’s of smiles and laughs. I can’t wait to see if all the baseball cinema changes the way they play tomorrow since we’ll be having another big game starting at 9:00 am. Speaking of which, I should get to bed. 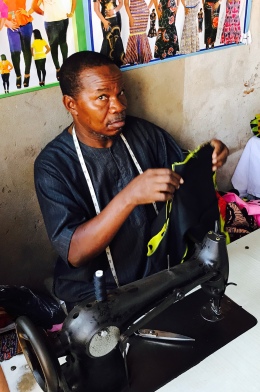 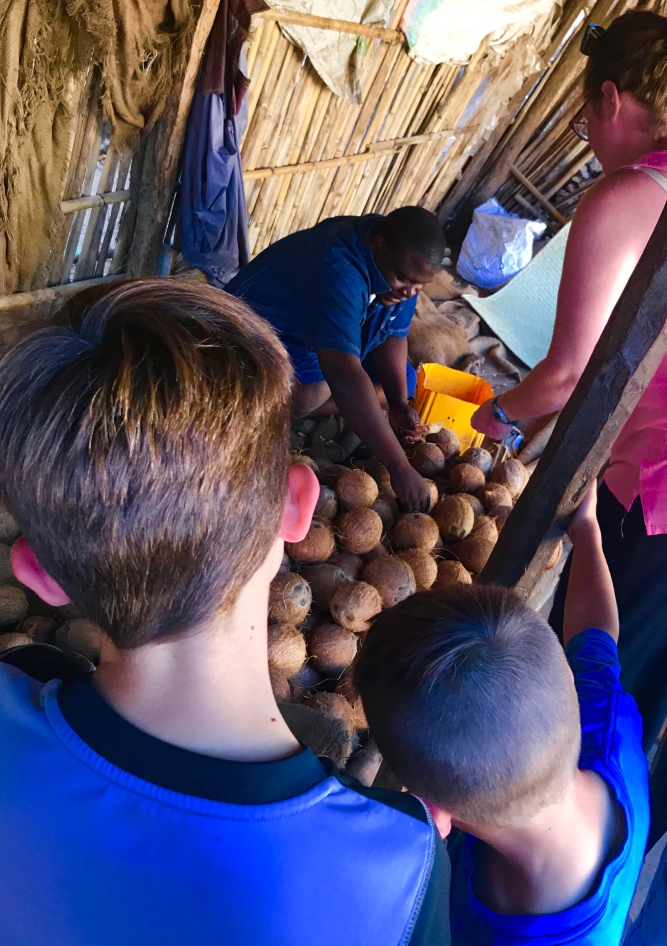 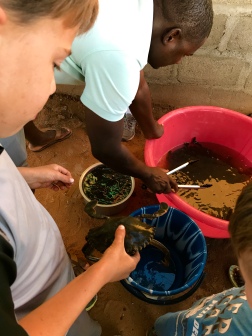 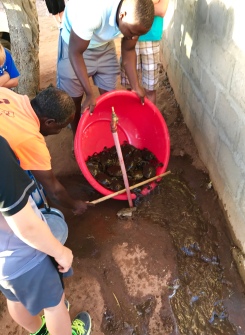 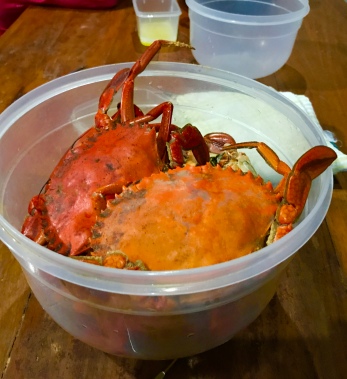 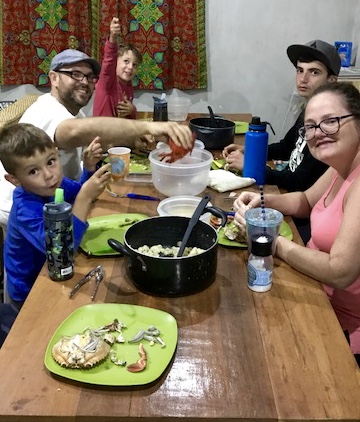 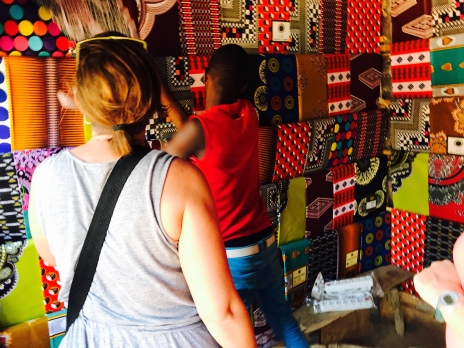 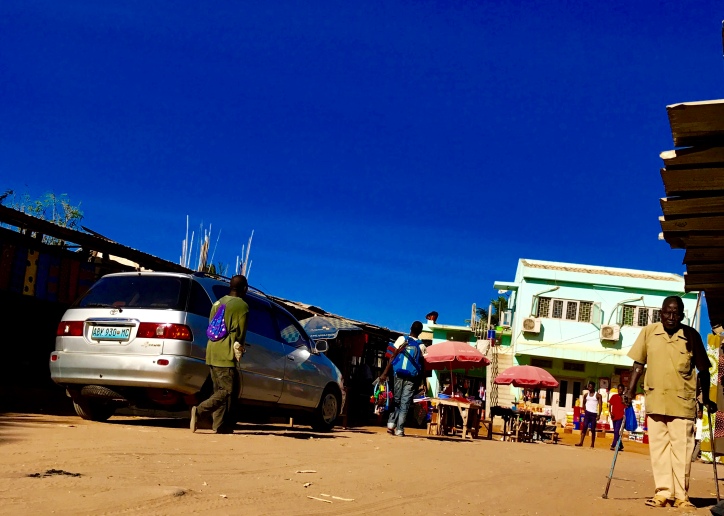