Rebecca is away at a women’s retreat this weekend and it had me thinking about the time she went to New Orleans with about 60 students and volunteers to help out with the rebuilding effort that was still going on 4 years after Katrina. It was just me and Eli for a week and he was less than a year old…good times.

That thought moved into a daydream about the trips to NOLA and the people we met… and that caused me to try and facebook my friend Keith Mason.

As it turns out, Keith has been one of the most influential people in my life.

There were 15 or so Campus Life volunteers (that happened to be best friends) and about 50 kids that we broke out of suburbia for spring break each year, in an effort to help the hurting in NOLA and ultimately point students towards Jesus Christ. We did this for four years starting just after the storm.

My team of students, along with my good friend Tracy Weirda piled into an 11 passenger van and headed towards 4828 Nottingham Drive. At this point the students were mostly still consumed by the reality that they were together and a million miles from home without their parents and cell phones. Their chatter created a loud blurry noise that haunts me still. As we approached the 4800 block, I noticed a house a ways off, that had helium balloons hovering over the mail box. As we came closer, I realized that it was the house to which we were assigned… Just as we came upon the front of the house, a man trotted out into the middle of the street and began waving his arms like he had been waiting for us for a year. He literally walked right out in front of the van and and caused me to hit the brakes sort of hard. I put it in park and got out to greet him. He came up to me and wrapped his arms around me and squeezed like I was the Scottish guy in Braveheart ready to take on the British with him. The kids poured out and Keith started hollering and greeting and hugging, but ultimately assembling us in a circle so he could speak….”It blesses my soul…FOR REAL, FOR REAL to see you children today. This is my house and the LORD HIMSELF has delivered you folks…to deliver me!” He then took time to chit chat with students and begin learning names, then he bellowed…”Ok friends, let’s before we get going, take a moment to call on God and ask his blessing on our time together.” Keith asked us to form a circle and join hands, and then launched into one of the most beautiful prayers I’ve ever heard uttered. “AMEN” he says, and I look around at all these kids who mostly don’t have a relationship with the God we had just prayed to. To my surprise, they were riveted by Keith and his passion for his Jesus.

We went to work, and the kids worked twice as hard as I expected, and they were twice as nice to each other. At lunch time, Keith appeared out of thin air with 2 po boys totaling 10 feet in length. One was filled with fried oysters and the other shrimp. These ingredients are like Italian Beef in Chicago to the people of NOLA. I felt bad as he set them down on the table and all the kids just sort of stood there staring at them trying to think of how they might figure a way to be polite without touching these wretched sandwiches. Keith wasn’t having any of it. 1st he circled us us and did a 10 minute mini sermon talking about Gods goodness and saving grace, then he lead a prayer of thanksgiving. After that, he began tearing 10 inch lengths of po boy and handing them to each and every kid. They all accepted and then he spent the lunch hour hounding them to eat the sandwich as he asked them questions about their lives and shared stories with them.

For the next few days, it was much of the same, Keith was on the job site and praising God, and stirring the hearts of students. Every time I turned around, it seemed that he had a kid off to the side, sharing important things with them having to do with the good news of Christ.

Each evening, we would retreat to the church we were staying at and gather as a large group for dinner, games, a “talk”, and discussion time. On day four, the kids on my team couldn’t help but begin sharing the things that Keith had been sharing with them throughout the week while we were in small group. Each and every one of them was trying to reconcile the notion they had about what a “Christian” looked like, with the one they had been connecting with all week in Keith. They couldn’t believe his passion for Jesus in light of the seeming devastation that had taken place in his life resulting from Katrina. On this particular night, all the kids were emotional as they shared how meeting Keith had changed them, and their perception of Jesus…and his people. Just as things are at a plateau and kids are just waiting for someone to ask them if they would like to choose this day to put God 1st, THE DOORS OF THE SANCTUARY SWING OPEN AND KEITH WALKS IN SMILING EAR TO EAR. The kids rose and ran over to him and started huggin him and telling him how great it has been to get to know him. He immediately senses what’s happening and plops is 330 pound butt down on the ground and circled the kids up. He shared and heard…and then prayed with and for the group, then he left. What he left behind though, was a group of kids that were officially wrecked by the reality of the Gospel. I can speak from experience that it’s not rocket science to get a bunch of students worked up at an emotional level, only to see them behave as if it never happened just hours later. This was different than that. I know these kids today, they are all moving through or have completed college by now and they were all changed for life that week. These kids..now men and women, are living lives in light of Jesus Christ and his beautiful Gospel. There is a pastor, a missionary and a brilliant creative among this small group of students that include Keith in their testimony.

I stayed in touch with Keith for years, the way old friends do…from time to time.

Two years after we had all last seen him, I reached out to see if he would consider flying out to Chicago to share with the people that support Campus Life about the blessing the kids were to him and also about the truth that he shared with them. He accepted and Rebecca and I along with our friends kicked in and paid for his flight and he stayed at our home while he was in town. We had just gotten a Wii when he visited, and He and Rebecca and I stayed up late playing Wii tennis. I remember the belly laughing as we “designed” our characters. My sons play the game now and every time I see the “Keith” character pop up on the screen I think of him and his impact. Keith came to the annual Campus Life banquet and did what he does…and it was simply beautiful.

When I went to Facebook today to try and find Keith I had no luck, so I Googled him…and found his obituary

At first, I wept because he was gone…now I weep because this obituary doesn’t tell the story. Keith impacted soo many people in his short life that an amphitheater wouldn’t have held them, and his death delivers nothing more than a succession list and service info.

“Keith, here is your amended obituary my dear brother.”

Mr. Mason had a full understanding of the reality that all things good come from God, moreover he made it the very mission of his life to help the people around him understand this wonderful truth. Keith found his true calling the day after Hurricane Katrina. He woke up that morning, knowing he was born to encourage those called to rebuilding his beloved city. He worked tirelessly to make sure the thousands of volunteers knew that the people of NOLA were thankful for their efforts. He also made sure to articulate the source of his Joy…Jesus Christ. Loving Christ, Loving Others, and Living Life on Purpose represent the cornerstones of this beautiful man’s legacy. May we all engage with, and learn from your passion and your pursuit of God.

IMPORTANT: Please share this post on your fb wall if you are a campus lifer so we can make sure to get the word out to all students that may have known Keith. In fact, please share it anyhow because his life mattered…

ALSO: Please share comments and stories so I can send them to Keith’s friends and family to encourage them regarding his impact far and wide.

I miss you my dear brother… 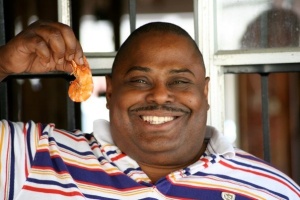 6 thoughts on “NOLA misses you, and so does everyone else Keith Mason…”