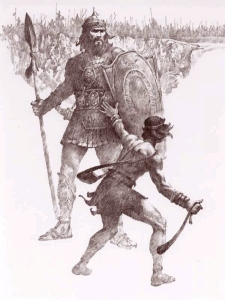 I have a distant cousin named Terry. Terry and I had the good fortune of spending some time together several months ago and we connected deeply on several levels. He and I are like-minded in several ways and I imagine this blog will include a multitude of insights I pick up from him as time goes on.

The first has to do with seeing the future…

I reached out to Terry this week to let him know how things were going and to let him know about some new developments in my life. He encouraged me greatly, and took some special time to talk to me about seeing the future.

He started by saying…”John, belief enables us to see the future before it comes to pass.”

Terry is one of those guys that has the abillity to shock you with profound statements like this but before I could even develop a skeptical thought, he began reminding me of 1 Samual 17…David and Goliath.

4-7 A giant nearly ten feet tall stepped out from the Philistine line into the open, Goliath from Gath. He had a bronze helmet on his head and was dressed in armor—126 pounds of it! He wore bronze shin guards and carried a bronze sword. His spear was like a fence rail—the spear tip alone weighed over fifteen pounds. His shield bearer walked ahead of him.

8-10 Goliath stood there and called out to the Israelite troops, “Why bother using your whole army? Am I not Philistine enough for you? And you’re all committed to Saul, aren’t you? So pick your best fighter and pit him against me. If he gets the upper hand and kills me, the Philistines will all become your slaves. But if I get the upper hand and kill him, you’ll all become our slaves and serve us. I challenge the troops of Israel this day. Give me a man. Let us fight it out together!”

11 When Saul and his troops heard the Philistine’s challenge, they were terrified and lost all hope.

12-15 Enter David. He was the son of Jesse the Ephrathite from Bethlehem in Judah. Jesse, the father of eight sons, was himself too old to join Saul’s army. Jesse’s three oldest sons had followed Saul to war. The names of the three sons who had joined up with Saul were Eliab, the firstborn; next, Abinadab; and third, Shammah. David was the youngest son. While his three oldest brothers went to war with Saul, David went back and forth from attending to Saul to tending his father’s sheep in Bethlehem.

16 Each morning and evening for forty days, Goliath took his stand and made his speech.

17-19 One day, Jesse told David his son, “Take this sack of cracked wheat and these ten loaves of bread and run them down to your brothers in the camp. And take these ten wedges of cheese to the captain of their division. Check in on your brothers to see whether they are getting along all right, and let me know how they’re doing—Saul and your brothers, and all the Israelites in their war with the Philistines in the Oak Valley.”

20-23 David was up at the crack of dawn and, having arranged for someone to tend his flock, took the food and was on his way just as Jesse had directed him. He arrived at the camp just as the army was moving into battle formation, shouting the war cry. Israel and the Philistines moved into position, facing each other, battle-ready. David left his bundles of food in the care of a sentry, ran to the troops who were deployed, and greeted his brothers. While they were talking together, the Philistine champion, Goliath of Gath, stepped out from the front lines of the Philistines, and gave his usual challenge. David heard him.

24-25 The Israelites, to a man, fell back the moment they saw the giant— totally frightened. The talk among the troops was, “Have you ever seen anything like this, this man openly and defiantly challenging Israel? The man who kills the giant will have it made. The king will give him a huge reward, offer his daughter as a bride, and give his entire family a free ride.”

26 David, who was talking to the men standing around him, asked, “What’s in it for the man who kills that Philistine and gets rid of this ugly blot on Israel’s honor? Who does he think he is, anyway, this uncircumcised Philistine, taunting the armies of God-Alive?”

27 They told him what everyone was saying about what the king would do for the man who killed the Philistine.

28 Eliab, his older brother, heard David fraternizing with the men and lost his temper: “What are you doing here! Why aren’t you minding your own business, tending that scrawny flock of sheep? I know what you’re up to. You’ve come down here to see the sights, hoping for a ringside seat at a bloody battle!”

29-30 “What is it with you?” replied David. “All I did was ask a question.” Ignoring his brother, he turned to someone else, asked the same question, and got the same answer as before.

31 The things David was saying were picked up and reported to Saul. Saul sent for him.

33 Saul answered David, “You can’t go and fight this Philistine. You’re too young and inexperienced—and he’s been at this fighting business since before you were born.”

34-37 David said, “I’ve been a shepherd, tending sheep for my father. Whenever a lion or bear came and took a lamb from the flock, I’d go after it, knock it down, and rescue the lamb. If it turned on me, I’d grab it by the throat, wring its neck, and kill it. Lion or bear, it made no difference—I killed it. And I’ll do the same to this Philistine pig who is taunting the troops of God-Alive. God, who delivered me from the teeth of the lion and the claws of the bear, will deliver me from this Philistine.”

38-39 Then Saul outfitted David as a soldier in armor. He put his bronze helmet on his head and belted his sword on him over the armor. David tried to walk but he could hardly budge.

David told Saul, “I can’t even move with all this stuff on me. I’m not used to this.” And he took it all off.

40 Then David took his shepherd’s staff, selected five smooth stones from the brook, and put them in the pocket of his shepherd’s pack, and with his sling in his hand approached Goliath.

41-42 As the Philistine paced back and forth, his shield bearer in front of him, he noticed David. He took one look down on him and sneered—a mere youngster, apple-cheeked and peach-fuzzed.

43 The Philistine ridiculed David. “Am I a dog that you come after me with a stick?” And he cursed him by his gods.

44 “Come on,” said the Philistine. “I’ll make roadkill of you for the buzzards. I’ll turn you into a tasty morsel for the field mice.”

45-47 David answered, “You come at me with sword and spear and battle-ax. I come at you in the name of God-of-the-Angel-Armies, the God of Israel’s troops, whom you curse and mock. This very day God is handing you over to me. I’m about to kill you, cut off your head, and serve up your body and the bodies of your Philistine buddies to the crows and coyotes. The whole earth will know that there’s an extraordinary God in Israel. And everyone gathered here will learn that God doesn’t save by means of sword or spear. The battle belongs to God—he’s handing you to us on a platter!”

48-49 That roused the Philistine, and he started toward David. David took off from the front line, running toward the Philistine. David reached into his pocket for a stone, slung it, and hit the Philistine hard in the forehead, embedding the stone deeply. The Philistine crashed, facedown in the dirt.

50 That’s how David beat the Philistine—with a sling and a stone. He hit him and killed him. No sword for David!

51 Then David ran up to the Philistine and stood over him, pulled the giant’s sword from its sheath, and finished the job by cutting off his head. When the Philistines saw that their great champion was dead, they scattered, running for their lives.

52-54 The men of Israel and Judah were up on their feet, shouting! They chased the Philistines all the way to the outskirts of Gath and the gates of Ekron. Wounded Philistines were strewn along the Shaaraim road all the way to Gath and Ekron. After chasing the Philistines, the Israelites came back and looted their camp. David took the Philistine’s head and brought it to Jerusalem. But the giant’s weapons he placed in his own tent.
55 When Saul saw David go out to meet the Philistine, he said to Abner, commander of the army, “Tell me about this young man’s family.”

56 The king said, “Well, find out the lineage of this raw youth.”

57 As soon as David came back from killing the Philistine, Abner brought him, the Philistine’s head still in his hand, straight to Saul.

“I’m the son of your servant Jesse,” said David, “the one who lives in Bethlehem.”

As you can see, David had a clear vision of what Goliath was in for by taunting the the people of “God Alive”. David didn’t need to pray or contemplate or plan…he could see Goliath hitting the ground from the get go.

Terry is right…As we approach life in light of the greatness of God, we are able to see victory plain as day before it ever happens.

What is your giant? What’s the thing you have been shuttering at the sight of for way too long?

Infuse belief into your nightmares and watch them become sweet dreams….and then realities.

PS: I know this was a long post, I’ll be more considerate in the future but I thought it was an insight worth sharing without edit:)